Voices from the Past 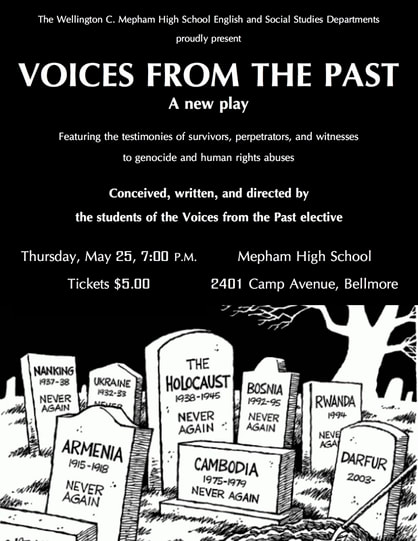 Voices from the Past showcases the voices of victims, survivors, perpetrators, and witnesses—be they bystanders or upstanders—of genocide and human rights abuses stretching from 1915 Armenia to the present.  The entirety of the play, with the exception of bits of added narration, is comprised of their real and true testimonies.  This play does not portray characters; it portrays people.

The students conceived this play as their final project for the 2016-2017 school year.  Over the course of the year, they learned about and studied the genocides in Armenia, Nazi Europe, and Rwanda, to name a few, while also becoming informed about human rights violations including the Japanese internment camps of 1940s United States, modern slavery, child soldiers, and human trafficking.  What they realized is that history continues to repeat itself as the lessons of the past are forgotten or ignored.  While the students understand that they cannot go out and entirely change the world, they hope they can use their newfound knowledge to inspire others to reconsider the way they treat others.  Compassion and empathy are the best defense against hatred and apathy.

​Ultimately, it is everyone's responsibility to hear the voices from the past and to listen to their stories.  By using the voices of the present to echo these tales, this work aims to inspire its audience—the voices of the future—to remember these people, the hardships they endured, and the lessons they gift to us.
Performance Date
Thursday, May 25, 2017 @ 7:00 PM