Theatre is designed to affect the audience and, in essence, the community at large. At the end of a performance, the audience is expected to exit the theatre with new insight that will leave the audience with the goal of implementing positive change within the community and world at large. As the students have realized, cast and crew do not need to be on the stage or in the theater itself to positively influence the community. In January of 2014, Skull and Bones decided to rededicate its annual revue to a cause or charity of the students' choice. Little did they expect that this decision would open the door to utilize and to share their energies and talents with a much broader audience.

Everything Special Needs
Walk for Everybody - October 30, 2016

On Sunday, October 30, 2016, the Skull and Bones volunteered, performed, and walked at the Everything Special Needs annual Walk for Everybody at Greis Park in Lynbook.  On Friday, January 20, 2017,  Skull and Bones will present its annual A Night on Broadway revue in its efforts to continue raising money, support, and recognition for this organization.  So far, Skull and Bones has managed to raise $666.00 for the walk; $585 raised for the walk and $81 from Skull and Bones' efforts at Mepham's Homecoming.  One of our proud alums, Matt Gibbons '16, even returned to help support our efforts.  These photographs show the fun the Skull and Bones members had while volunteering, performing, and walking for a great cause.

On September 18, the Skull and Bones raised $3,363.73 from its annual A Night on Broadway revue for the Lustgarten Foundation.  Wishing to continue their efforts in raising money for this organization, Skull and Bones members walked in the annual Pancreatic Cancer Research Walk, a non-competitive walk-a-thon held at Jones Beach.  Skull and Bones so far managed to raise an additional $643.00 for the walk.  Combined with the September revue, the club has raised a total of $4,006.73 for the Lustgarten Foundation.  One of our proud alums, Meghan D. Corless '14, even returned to help support our efforts.  These photographs show the fun the Skull and Bones members had while volunteering and walking for a great cause.

In January, the Skull and Bones raised $1,651.00 from its annual A Night on Broadway revue for the Lymphoma Research Foundation.  It was then personally invited by the LRF to join, volunteer, and walk in its annual Lymphomathon, a non-competitive walk-a-thon held at the scenic Old Westbury Gardens.  Skull and Bones managed to raise an additional $1,325.00 for the walk.  Combined with the January revue, the club raised a total of $2,976.00 for the LRF.  These photographs show the fun the Skull and Bones members had while volunteering and walking for a great cause. 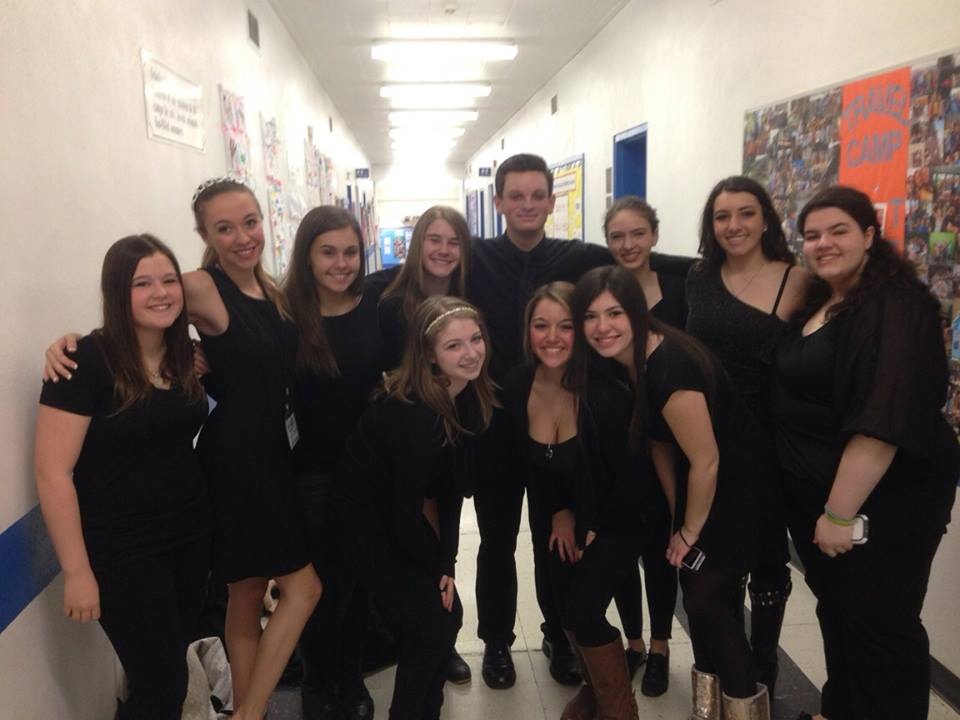 In April 2014, the above Skull and Bones members participated with other groups from the Bellmore-Merrick CHSD and local communities in the Mid-Island Y J.C.C.'s first annual fundraiser revue.  The money raised by this event was donated to P.O.B. Cares and Project P.A.C.E., both of which support senior citizens who wish to live independently.  Standing from left to right, the students are Hailey Canonico, Lindsey Von Elm, Jenna Frisolone, Emily Fontanetta, Kevin Burns, Emily Garone, Nicole Pioli, Meghan D. Corless, and crouching from left to right are Jess Serviss, Morgan Paccione, and Lauren LoVarco.
Skull and Bones Drama Club          Wellington C. Mepham High School          Bellmore-Merrick CHSD
Proudly powered by Weebly